Is it Ukraine today, Taiwan tomorrow? 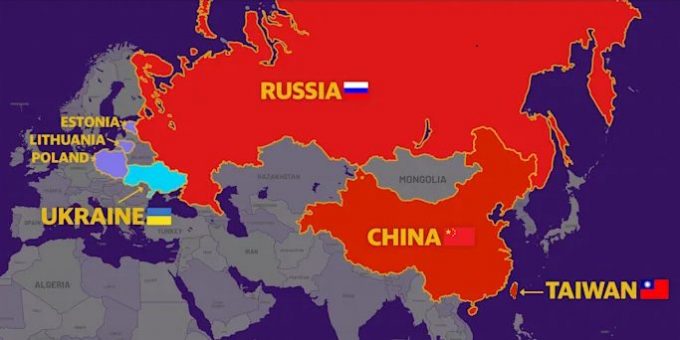 Open Door Investment Management give their views on the impact of the Russian invasion on China.

1. Do we need to worry about China’s strong ties to Russia?

In many ways, Russia’s economy is a good fit for China’s, in that it is a huge supplier of many commodities that China needs. It could also be argued that convenient overland supply reduces China’s reliance on imports through congested (and potentially contested) sea lanes.

As a secondary point, this initiative could be seen as the reverse of the Nixon/Mao initiative in 1972, which has subsequently been written up as a strategic move of genius by the US, undermining its cold war enemy, the Soviet Union. The growing Chinese ties with Russia are the direct reaction to pressure from, and worsening ties with, the US. However, going forward, as a consumer market and technology supplier, the US has, of course, a lot more to offer China than Russia.

2. Why isn’t China’s government publicly condemning Russia for the invasion?

China has avoided condemning Russia for the invasion, instead singling out the US for blame in the conflict. It has also opposed US and European sanctions on Russia, raising speculation that it could help Moscow offset the economic impact of sanctions. China, for long worried about “encirclement”, sympathises with Russia’s legitimate concern about why NATO, supposedly a defensive organisation, is so determined to expand right up to the border of Russia.

3. Is it likely that the West will place similar sanctions on China for its unwillingness to condemn Russia?

We believe China will be careful not to be too flagrant in helping Russia with access to finance, semiconductors and the like. The West will also be keen not to push China into Russia’s arms by imposing Ukraine-related sanctions. The US needs China’s help on other matters, such as climate change and North Korea. So it would seem unwise for the West, with global growth already under pressure, to embark on an economic war with both China and Russia at the same time.

4. Will the fallout from the Russian invasion (however it turns out) be good or bad for China’s economy?

The biggest immediate threat is food and energy-price inflation. This is, of course, a global phenomenon, but Chinese politicians are particularly sensitive to food inflation. It may hamper the Chinese government’s ability to stimulate a slowing economy through monetary or fiscal means. The inflation in nickel and aluminium costs will also provide a challenge for the much-hyped electric-vehicle sector.

5. Is it Ukraine today, Taiwan tomorrow?

The situations in Taiwan and Ukraine are, of course, not directly comparable – now only 13 out of 193 United Nations members recognise Taiwan as a sovereign state under the title Republic of China. The Ukraine, while a former Soviet Republic, is regarded as an independent sovereign country with membership of the UN. More practically, the Chinese government, so committed to stability, especially ahead of the 20th Party Congress in October, will have seen how destabilising would be the extensive and immediate sanctions that any attack on Taiwan would entail. Another lesson is the clarity of information from satellites, which would highlight the complex preparations for an amphibious invasion well in advance. The Russian invasion has struggled despite overwhelming superiority in numbers, a long land border and some local support. Also, though one may argue about its extent or effectiveness, the commitment by the US to defend Taiwan would surely give Zhongnanhai pause.

6. Are we wise to buy or hold investments in China when the geopolitical situation is so uncertain?

Although Chinese markets were volatile in the past two months, we believe China will prove a relatively safe haven from the investment point of view this year. In the lead-up to its once-a-decade leadership reshuffle planned for later this year, China has repeatedly highlighted the need for economic growth and stability. Its insistence of a GDP growth target of around 5.5% shows that considerable monetary and fiscal firepower will be employed this year. We expect a bailout of the property sector, led by state-owned developers, and an easing of the regulatory crackdown on internet platforms. Investment will most likely focus on self-sufficiency and leadership in key future technologies such as artificial intelligence and green energy.

In the event of “black swan”, or even “grey rhinoceros”, events, China’s A-share markets are very liquid, with daily turnover being US$160 billion. Our China A-Share Fund can be liquidated within a little more than one day, at current trading levels. In case of the worst, we have prepared an “Armageddon trade programme”, which we believe will reduce portfolio risk within hours.

7. Is the world now dividing further into two groups (democracies vs autocracies)? Will we see a political and economic decoupling of the two?

The cost of decoupling would be huge and would take a long time. Getting a lot of squabbling democracies to cooperate is difficult (unless there is a powerful external threat, such as Putin). We would argue that it is even harder for dictators to cooperate given a fundamental lack of trust.

8. If there is a significant correction, would it be time to bottom-fish big Chinese internet platforms or USlisted ADRs?

Although we have seen signs of easing regulatory scrutiny, it seems still a little too early to buy the big internet platforms or ADRs Regulatory scrutiny is still ongoing (key investigations into Ant Group and Didi have not yet concluded), and new regulations have recently been released, such as fee reductions for fooddelivery platforms. Historical valuations need to be reassessed in light of operational-cost increases to comply with new regulations. Chinese ADRs also remain under pressure from the threat of delisting due to their inability to comply with US audit oversight.

Overall, we believe that China’s A-share markets will outperform the broader Chinese markets in 2022, especially relative to the big internet platforms. We also see a particular opportunity in Taiwan’s unsung biotech sector. Support for the depressed property market may also offer some deep-value investments later in the year.

For more information about our company, please visit www.odfund.com

Welkin China Private Equity has published its prospectus. You can access this here Applications are via a placing – see the information in the prospectus. There is no […]

Fidelity China Special Situations reports that, over the year ended 31 March 2022, its benchmark index, the MSCI China Index, fell by 29.3%, giving up all of the […]