Companies fund activities with a mix of permanent capital in the form of equity (shares) and debt.

Investment companies and investment trusts mostly use equity, but they can also borrow, to “gear up” or enhance the returns generated by the equity.

In this part of the guide, we explore the various different forms of capital structure and outline the benefits and pitfalls of each.

It is useful to consider seniority when analysing a company’s capital structure. Each different type of equity and debt ranks differently when it comes to receiving income or sharing out the company’s assets in the case of a liquidation. The higher the ranking, the safer the investment. Ordinary shares tend to rank at the bottom of any capital structure. Interest rates on senior ranking debt tend to be lower than for junior loans.

If shareholders agree to wind up (liquidate) the company (this needs to be approved by at least three-quarters of those voting), the company’s assets are distributed among the stakeholders in order of seniority.

It is important to check if a single shareholder owns more than half of the ordinary shares. This is rare with investment companies but it could mean the company is run for the benefit of that single shareholder rather than yours.

A dwindling number of companies have both voting and non-voting shares. Non-voting shares get all the risks and rewards of owning shares in the company but have little or no say in the way it is run.

A few companies have restricted voting shares – the way these work can differ from company to company. It might be that they have a fraction of a vote compared to an ordinary share or only have voting power in certain circumstances.

Subject to shareholder approval, companies can shrink themselves by buying back shares. These shares can be cancelled or, if shareholders have approved it, held by the company in treasury. Treasury shares are not in circulation, have no votes and are not entitled to dividends, but they can be reissued in a process which is simpler than creating brand new shares.

Companies often alter their capital structure by borrowing money. An investment company will be tempted to borrow if it believes returns it will get investing the borrowed money will be greater than the cost of borrowing – the interest and any other fees payable.

Bank lending often comes via a revolving credit facility. These allow borrowers to decide, within, limits, how much to borrow and when to make repayments. An alternative is a term loan where the loan is paid off gradually over the life of the loan on predefined repayment dates or is paid back on one fixed day in the future. The latter mechanism is also called a bullet repayment.

Lenders may ask that loans are secured on specific assets. Such arrangements give lenders comfort that they will retrieve their money even if the borrowing company can’t pay back the loan or the interest. Lenders would take possession of the asset or assets and sell, much as a mortgage provider would repossess a house if the homeowner failed to keep up repayments.

Lenders making an unsecured loan might insist that the borrowing company is put into liquidation in the event of an inability to repay. Unsecured debt would hopefully be repaid with a full-scale sell-off of company assets.

Borrowers, and other creditors such as tax authorities, are typically paid out before money is redistributed to ordinary or other shareholders.

Lenders sometimes insert covenants into the terms of a debt agreement. These may change the terms of a loan agreement if a company fails to meet specified measures of value, profit or other targets. Breaches of covenant may trigger an obligation for early repayment, a higher rate of interest or some other penalty.

Covenants often comprise loan-to-value measures which set the size of debts in the context of asset values. Covenants also often compare the size of a company’s interest bill with its profitability or interest cover ratios. They can also include other factors the lender thinks important, such as stipulating that the key personnel in the company stay working in the business.

As an alternative to bank finance, the company can issue a bond (sometimes also referred to as a debenture or loan stock). Although bond issues can be issued to a single investor, they can also enable companies to raise finance from multiple sources. Bonds often have a fixed term where companies and governments promise to repay bondholders on a pre-agreed future date.

A few loan agreements stipulate that the debt cannot be assigned to anyone else: that is, they can’t be traded. It is more common that investors are allowed to buy and sell bonds after issue and before redemption. Trading can be a big advantage for companies because it means investors can come and go without recourse to the borrower/issuer. As a consequence, a company’s capital position can remain stable even if one or more lenders want to redeem.

Bonds may be traded on public exchanges, such as stock exchanges. Some investors buy and sell bank loans as well, but trading is easier in the case of bond issues.

Some bonds are called fixed-interest securities because issuers – which can be companies or governments – promise to pay a pre-set amount of income every year. This is effectively the interest rate but is referred to as the coupon. Some bonds have coupons that adjust to reflect rates of inflation.

Other forms of gearing

Some investment companies use contracts for difference (CFDs), for gearing purposes. These are derivative contracts struck with a bank relating to a security, a collection of securities, or an index.

The capital value of a debt is mainly dependent on:

Investors who buy debt denominated in a foreign currency face additional risks unrelated to the underlying value of the debt. Some investment companies adjust their foreign exchange risk by borrowing money in foreign currencies.

Some companies borrow money in an overseas currency without having assets in that foreign country to support the debt. This is a risky strategy as exchange rate moves can alter the effective size of debts denominated in the company’s home currency.

Preference shares have most of the characteristics of a bond – the capital must be repaid on a pre-defined date and they tend to generate a predetermined rate of income for holders. They tend to rank above the ordinary shareholders both in terms of the right to receive income (preference share dividends must be paid in full before ordinary share dividends can be paid) and the right to be repaid in a liquidation.

The most common type of split capital company is one that includes zero dividend preference shares (zeros or ZDPs) within its capital structure. Their entitlement to the assets of the company rises in a straight line between their entitlement on issue and their redemption value. They are not entitled to receive dividends and rank ahead of the ordinary shares in the event of a liquidation. ZDPs are usually priced with reference to their gross redemption yield or GRY. This is a measure of the rate of return offered by an investment up until the date it matures. It is usually expressed as an annualised percentage – a bit like an interest rate. It is worked out by annualising the total “interest” cost. Companies publish a cover ratio – how many times assets exceed the final cost of the zero. A low cover ratio represents a riskier investment and investors usually demand a higher GRY for a low cover ratio, and they will also want to be paid more for an issue invested in volatile assets because there is a higher chance that the assets will not cover the zero when it matures.

Geared ordinary shares, also called ordinary income shares, get a dividend and what is left of the assets in the event of a liquidation.

Combinations of the various classes of share capital (that is, all the elements of the capital structure apart from debt) are sometimes put together to form package units. Package units give investors the same effective exposure as if the company had only issued ordinary shares.

Polar Capital is one of the guide’s kind sponsors: 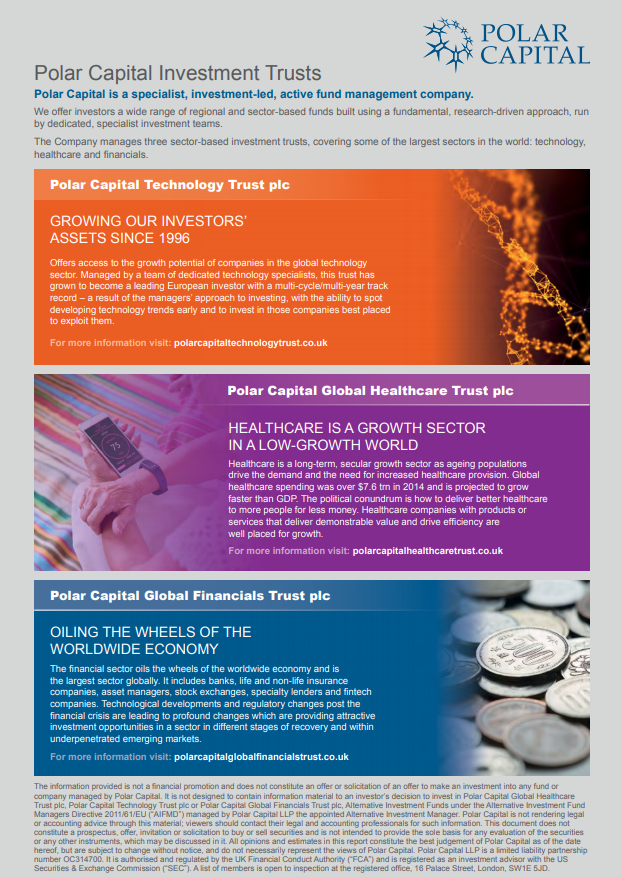