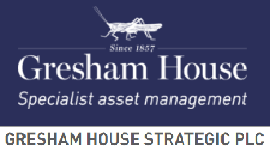 Gresham House Strategic plc (GHS) has released its final audited results for the year ended 31 March 2018. in it, the company reports that its NAV per share grew by 10.7%, compared to the FTSE Small Cap Index and the FTSE All-Share Index , which returned -0.7% and -2.6% respectively. This, the chairman points out, is the company’s best performance since it was launched in 2015.

The company also pointed out that the NAV per share has returned 20.1% since the appointment of Gresham House Asset Management Ltd as investment manager in 2015.  The short period of time that has passed since the manager change is seen as one of the reasons for the discount to NAV remaining low in the region of 20%.

The company is now fully invested. This has taken time, as the investment process, which involves finding undervalued opportunities, is lengthy.  It also takes time for that value to be realised by the market. The fact that the company hasn’t been fully invested has also been seen as a reason for the high discount.

In addition to its size (£34m), another reason that the company feels may be behind the discount is its position in IMImobile, which is 44% of the portfolio. The chairman commented that “the board has strong confidence in IMImobile and believes that “backing winners” is the right strategy.  We therefore remain strong supporters of what is presently the best performing asset in the portfolio whilst cognisant of the portfolio construction aspects of this substantial weighting.”

*Prior year figures are stated on a consolidated Group rather than Company basis.

Keystone Positive Change (KPC) has announced its annual results for the year ended 30 September 2021, a period that marked a new beginning for the trust as its management moved from Invesco to Baillie Gifford and it adopted its positive change mandate. Over the year KPC’s NAV total return was 17.3%, compared to a total […]