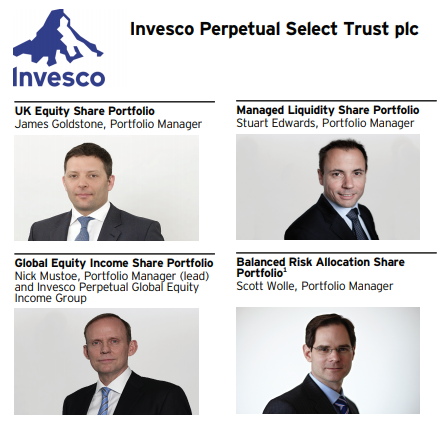 But first, a bit more on the company:

The company’s investment objective is to provide shareholders with a choice of investment strategies and policies, each intended to generate attractive risk-adjusted returns.

The company’s share capital comprises four share classes, each of which has its own separate portfolio of assets and attributable liabilities:

The NAV total return of the Global Equity Income Share Portfolio over the year was –1.3%, which compares with the total return from the MSCI World Index (£) of +5.3%. The share price total return was –0.1%.

The NAV total return of the Balanced Risk Allocation Share Portfolio was –2.7%, which compares with its benchmark of 3 months LIBOR plus 5% which returned +5.8%. The share price total return was –0.7%.

“It is disappointing, both for the board and for shareholders, to report on a year in which all three portfolios based on risk assets failed to meet or exceed their benchmarks.The board has engaged in active discussion with the portfolio management team to understand the sources of this underperformance.

Economic development over the period was quite stable though there does appear to be a gentle trend towards slower growth worldwide. This caused some sharp reversals in financial markets as they swung from the expectation of several rises in the US Federal Reserve Funds rate to the belief that the next change is more likely to be downwards.

The political scene was much more dramatic, especially in the UK and the US. The Brexit saga seems to come in several acts, each painfully like the previous one. It remains to be seen whether the new Prime Minister will adopt a different and more implementable policy both towards the European Union and the House of Commons. The US government, or at least the President, seems unconcerned by major policy swings, especially in trade, and, regarding the Middle East, seems only to be committed to Israel (or at least a Likud-led government there) and Saudi Arabia as allies. It also appears to have decided that China is a long-term adversary and not a collaborator.”

“After a financial year of low returns and reasonable profit growth, markets have become rather cheaper. Economic growth is still continuing, though at a slightly slower pace, and profits are still rising. Given the prevalence of very low nominal and real interest rates, markets should offer reasonable, though probably not very exciting returns, especially because there is very little euphoria around. However, it seems likely that growth will be slower and may indeed tip over into recession further out as US tax cuts lose their effect and China suffers from possible weakness of demand as it shifts from export and investment-led growth to domestic consumption. Europe still suffers from the problems of the Euro, exacerbated by German economic policy and the weakness of the banking system. To combat any recessionary tendency may require a shift towards government-led infrastructure and climate change based investment and therefore a different mix of fiscal and monetary policy.

The political scene is different and unpredictable. At any given moment it is possible that there is about to be either a real war in, for example, the Gulf or Venezuela, or a trade war between the US and almost any other country. Most of this comes from the extremely volatile character of the current US administration and President and it is impossible to predict whether sabre-rattling will turn into anything serious. The greatest restraint is the polling knowledge that the US public now has a deep aversion to foreign adventures and wars. More parochially, I wrote a year ago that “a Brexit settlement will be reached [during this year].” It hasn’t, yet a year on the prediction still seems valid. What form it will take is still unclear, and even a new Prime Minister may take a little while to assess the opposing forces bearing on his government and formulate a coherent policy. Meantime 31 October isn’t very far away.

If one tries to stand back from the immediate noise and look further ahead it is probable that China’s relative rise will continue, even if its lack of population growth holds it back a little. It will acquire competitive technology where it doesn’t have it and the existing economic interdependence makes it much harder for the US to shut it out than was the case with the Soviet Union. Climate change will be a dominant theme for decades to come, whether its effects are ultimately contained or cause major dislocation and political strife. Politicians, whether in democracies or autocracies, will have to deal with the disillusionment now felt by many of their citizens.”

Outperformance from all four of Invesco Perpetual Select portfolios

Invesco Perpetual Select has published its annual results for the year ended 31 May 2021, which show outperformance from all four of its portfolios of their benchmarks during […]

In QuotedData’s morning briefing – 24 May 2021: Graham Kitchen, non-executive director and chairman of the board and nomination committee for Invesco Select, has decided to step down […]

Invesco Perpetual Select risk assets outperform over interim period – Invesco Perpetual Select has published its interim results for the six months to 30 November 2019. But first, a bit more on the company: The company’s investment objective is to provide shareholders with a choice of investment strategies and policies, each intended to generate attractive risk-adjusted returns. The company’s share capital comprises […]

In QuotedData’s morning briefing 3 August 2020: Fidelity Japan (FJV) reported interim results to 30 June 2020. The trust’s NAV increased by 2.3% in sterling terms, which FJV noted was ahead of its reference index which returned (0.8%) and the average of the peer group which returned 0.7%. Manager, Nicholas Price, notes that: “Japan continues to […]