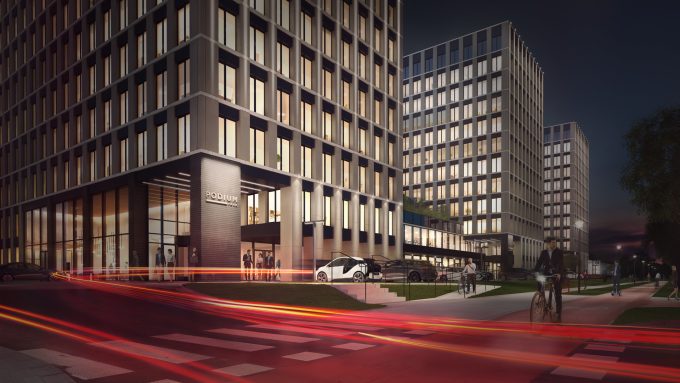 Globalworth, the office investor in Central and Eastern Europe, has agreed a deal to acquire an office in Kraków, Poland.

The asset, Podium Park, comprises three connected 11-storey buildings which will, on completion, have a total lettable area of ​​over 55,000 sq m, and it is one of the few office projects in Poland with BREEAM certificates at the highest possible level – Outstanding.

The first building in Podium Park was completed in Q4 2018 and is 18,500 sq m. The second and third buildings, which will add a further 37,000 sq m to the park, are under construction or to be constructed, with completion scheduled for Q4 2020 and Q4 2021, respectively.

The company has signed a development management agreement with the seller, Podium Investment Poland, in relation to the construction and completion of the second and third buildings at Podium Park.

The maximum transaction consideration for Podium Park has been set at €134m, with the final consideration to be determined based on the leasing status of the second and third buildings at completion and after customary deductions. The annual contracted rent at Podium Park upon completion of the development is expected to be approximately €9.6m.

Dimitris Raptis, deputy chief executive and chief investment officer of Globalworth, said: “Today’s announcement of the acquisition of Podium Park, one of the most modern and ecological office projects in Poland, marks the completion of the investment pipeline in Poland which we announced on 1 October as being under exclusivity. As such, we are continuing to add critical mass to Globalworth’s presence in Warsaw and Krakow, which should enable the Company to maximise asset management synergies and benefits of scale.”

Lukasz Duczkowski, Head of Investments – Globalworth Poland, added: “The transaction with Podium Investment provides a very strong end to the year for Globalworth. In 2019, we have acquired five office projects in Poland which are expected to have a combined value of around €590m once development components of these acquisitions have been completed.”

In a trading update, ahead of its annual results (to be published on or around 15 June), Jonathan Maxwell, the CEO of SDCL Energy Efficiency Income (SEIT)’s manager, […]

Globalworth Real Estate, which owns a portfolio of predominantly offices in Poland and Romania, has provided a covid-19 update. The group said its office assets in the two […]

Globalworth Real Estate Investments (GWI), a leading office investor in Central and Eastern Europe, announced changes to the company’s board and an update regarding the COVID-19 outbreak.  Board […]

In QuotedData’s other news 4 February 2020 Gore Street Energy Storage is raising money – £1.5m has been promised by two specialist ESG funds and they are subscribing for […]

In QuotedData’s other news 3 February 2020 BlackRock Throgmorton is asking shareholders for permission to issue more shares, having resold 5.5m of the 7m shares it was holding in […]