Bleak winter ahead for real estate 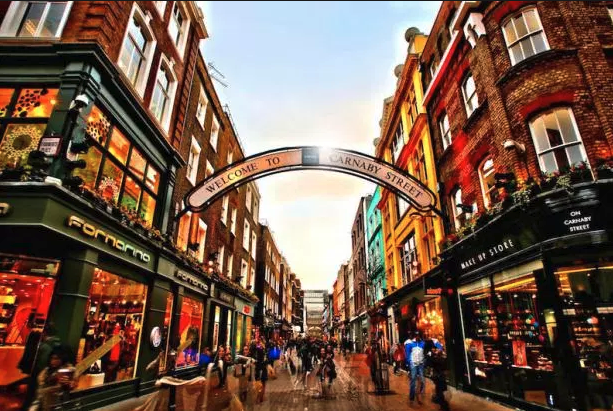 The brakes have been well and truly pumped on any positive sentiment that may have been building in the real estate sector.

After the successful ‘Eat Out to Help Out’ scheme and the government urging people to get back to the office, there was some light at the end of the deep, dark tunnel.

That is now just flickering after Boris Johnson announced this week a return to restrictions after a spike in COVID-19 cases. Pubs and restaurants will have to close at 10pm and workers are now being encouraged to work from home again.

The sector will be hoping the light will not be extinguished with a second full lockdown. Many businesses in the hospitality, leisure, food and beverage and retail sectors are teetering on the edge. Another full lockdown will send them over it.

Shaftesbury laid bare the full impact on the property sector in a trading update this week.

The REIT owns a 16-acre portfolio in London’s West End that comprises properties in the retail, leisure, food and beverage, office and residential sectors. It has collected just 41% of rents it has billed in the six months from the end of March to the end of September. 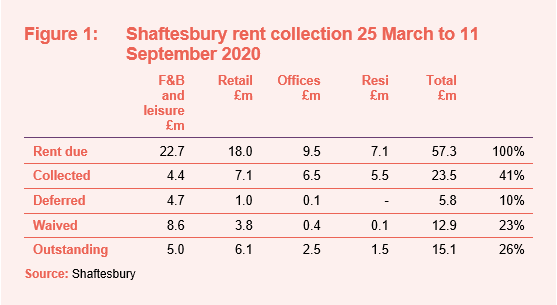 A sectoral breakdown shows that just 19% of rent has been paid by food and beverage and leisure tenants. Almost 40% of rents have been paid by retail tenants, while 68% of office and 77% of residential has been collected.

The worrying figures are the 23% of half-year rent that has been waived and the 26% that is still outstanding with no payment agreements in place.

Almost 50% (25% of annual rent) could be written off. A staggering number.

A look at its vacancy rates shows it shot up to 9.7% at the end of August. This compares to Shaftesbury’s 10-year average EPRA vacancy of 3.2%, and a vacancy rate of 4.8% on 31 March 2020. This mainly came in the retail and residential sectors.

Footfall in the West End had started to improve. Initially due to a return of local and domestic day visitors, and then supplemented a gradual return of the local office-based workforce, daily visits to the West End were approaching 50% of normal pre-pandemic volumes on the busiest days – concentrated in the lunchtime and evening periods.

That looks to be in jeopardy now with the new restrictions and guidelines.

The West End has traditionally benefitted from London’s reputation as a leading international destination, with over 200 million visits annually.

International business and leisure visitor numbers are not expected to recover to pre-pandemic levels until 2024, according to Tourism Economics.

It could be a bleak winter for London’s West End without office workers, an evening economy and foreign tourists – not helped by the government’s decision to end tax-free shopping arrangements with overseas visitors from next year.

Shaftesbury has announced its intention to raise £297m through a placing to firm up its balance sheet. The company, which owns a 16-acre chunk of London’s West End […]

Shaftesbury, the REIT that owns a 16-acre property portfolio in the heart of London’s West End, has collected just 41% of rent in the six months to 30 […]

Shaftesbury has posted a 7.9% drop in the value of its West End portfolio in half-year results as the impact of the covid-19 lockdown bites. The company’s portfolio […]

Is a central London powerhouse REIT on the cards?

Capital & Counties this week confirmed it was in talks to buy a 26.3% stake in rival West End landlord Shaftesbury in what would be the first steps […]

West End of London landlord Shaftesbury bucked the trend of retail negativity and reported a strong Christmas trading period. The company, which owns a 15.2-acre portfolio in the […]

Shaftesbury has pre-letted almost 50% of the office space at its 72 Broadwick Street redevelopment in Carnaby Street to American fitness and lifestyle brand Equinox. The group has entered into […]