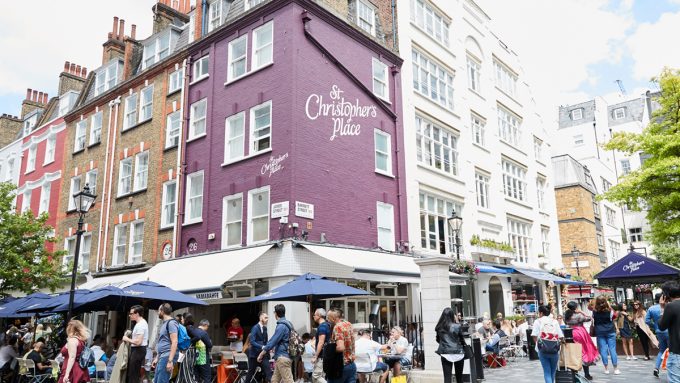 The announcement was made in the group’s annual results where it delivered a net asset value (NAV) total return for 2021 of 18.9% and a share price total return of 37.8%.

The group’s portfolio weighting to the industrial and logistics sector increased during the year to 30.6% (from 19.1%), but this is still far below most of their peers in the Property – UK Commercial sector.

On St Christopher’s Place, the chairman, Paul Marcuse, said: “It will take time for Oxford Street to recover from the effects of the pandemic but landlords along the street are now appraising significant investment into development and repositioning opportunities. Encouragingly we saw footfall recover in quarter four to 2019 levels and the return of employees to the office. An increase in international travel and the long-awaited opening of the Elizabeth Line later this year should also benefit St Christopher’s Place.”

The company launched a share buy-back programme in June 2021, using some of the proceeds from property sales, and purchased 46.3 million shares by the year end at an average discount of 22.3% and a cost of £45.2m. This enhanced the NAV by 2.2 pence per share during the year. The board said consideration would continue to be given to further buybacks if it believed that it continued to be in the best interests of shareholders.

The company had £138.1m of cash reserves at the year end. The group’s borrowings comprise a £260m term loan with Legal & General Pensions Limited, maturing on 31 December 2024. The Company also has a £50m term loan and an undrawn £50m revolving credit facility with Barclays. The Barclays facilities were extended by a year and are due to expire on 31 July 2023, with the option of a further one-year extension. As at 31 December 2021, the Company’s net gearing was 14.4%.

BMO Commercial Property Trust has bought two logistics assets for £66m and committed to two developments within its existing portfolio at a cost of £10.5m. These initiatives are […]

BMO Commercial Property Trust’s net asset value (NAV) has nudged up slightly in the quarter to the end of December 2020. The group posted a 0.5% increase in […]

In QuotedData’s morning briefing 30 June 2022: Riverstone Credit Opportunities Income (RCOI) has realised its investment in Roaring Fork Midstream, crystalising a 21.3% IRR and 1.16x MOIC. The loan was made in March 2021, with a $5.9m first lien delayed-draw term loan to sponsor-backed Roaring Fork Midstream, a company which owns and operates pipeline and […]