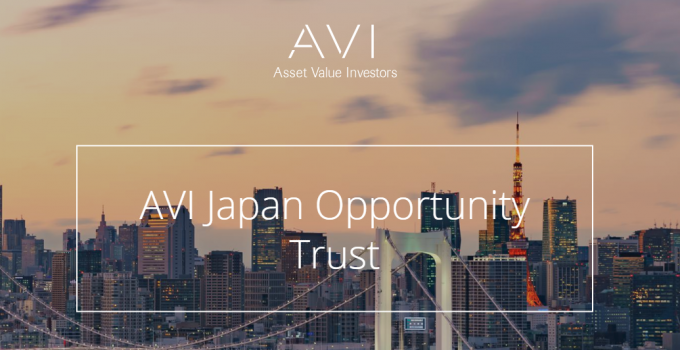 Asset Value Investors raises concerns over Fujitec board’s actions – Asset Value Investors, manager of AVI Japan Opportunity (AJOT) and AVI Global Trust (AGT) has called into question the credibility of Fujitec’s current board following its failure to hold former President Takakazu Uchiayma to account for decades of related-party transactions and after the debacle at Fujitec’s AGM where, despite shareholders not voting for his re-election, Takakazu Uchiayma was allowed to continue leading the company as chair.

AVI has been a shareholder in Fujitec for almost four years and has helped improve corporate value including the abolishment of an anti-takeover measure, improved disclosure, enhanced shareholder returns, and efforts to standardise production. However, AVI says that Fujitec’s response to legitimate concerns raised by Oasis Management Company regarding related-party transactions has fallen short of basic standards of good corporate governance.

Despite the board’s efforts to exonerate Mr Uchiyama of any wrongdoing, AVI remains entirely unconvinced that the numerous related-party transactions taken by Mr Uchiyama and his family do not pose a problem for Fujitec’s corporate governance. In recognition of Mr Uchiayma’s repeated involvement in related-party transactions and abuse of power, AVI voted against his reappointment at Fujitec’s 2022 AGM.

Nonetheless, in what AVI believes was an effort to conceal a low approval rating for Mr Uchiyama’s reappointment, the motion to reappoint him as President was withdrawn one hour before the AGM. Despite lacking shareholder support, shortly after the AGM, Mr Uchiyama was reappointed as chair.

Joe Bauernfreund, CEO of AVI, commented: “Fujitec has defied the voice of shareholders and circumnavigated the AGM voting process to appoint former President Takakazu Uchiyama as Chairman. This flies in the face of the efforts by the TSE, the Government and regulators to enhance corporate governance.

“Outside directors who were party to the decision to withdraw the motion to reappoint Mr Uchiyama just one hour before the AGM and then to reappoint him as Chairman should feel ashamed. As outside representatives, they are there to safeguard the interests of shareholders. We question whether the actions of the outside directors have been taken in the best interests of shareholders and whether they have the credibility to continue in their current positions.

“As a long-standing shareholder, we have had many fruitful discussions with Fujitec representatives over the past years but we are alarmed by recent developments. Shareholders cannot stand by idly while they are being ignored. We are proactively evaluating our next steps.”

A defining feature of 2022 was the strength of the US dollar, which shaped asset class returns for many investors over the year. The slump in the yen […]

AVI Global has published results for the 12 months ended 30 September 2022. Markets were weak over the period and the trust’s benchmark, the MSCI All Country World […]

Asset Value Investors, the managers of AVI Japan Opportunities (AJOT) has announced that it has submitted what it describes as “modest proposals to SK Kaken as a test […]