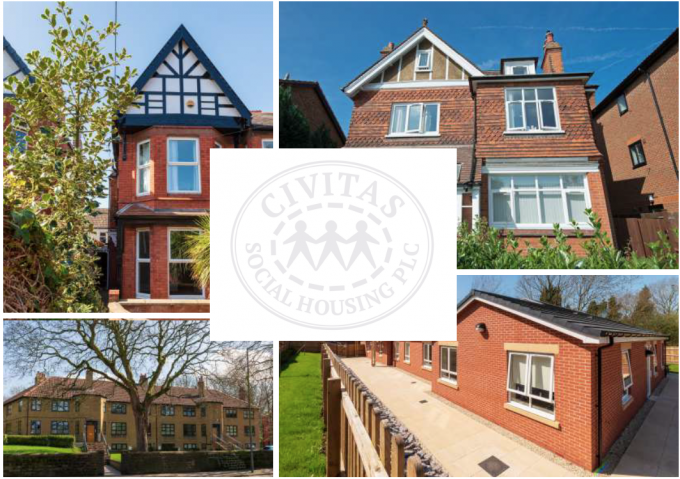 Civitas Social Housing has provided an update on the progress in the implementation of its new regulatory clause (details of which were announced in May).

The clause is intended to assist housing associations to be better positioned to achieve regulatory compliance under the Regulator of Social Housing’s governance and financial viability standard. The clause has now, after detailed negotiation including legal input, received approval from the boards of the two initial housing association.

Following this approval, the clause is now being introduced to several leases so that its impact can be incorporated into the long-term modelling that housing associations are required to prepare as part of their ongoing submissions to the Regulator of Social Housing (RSH).

The company has previously sought and obtained formal written confirmation from its valuers that the inclusion of a clause of this type within the company’s new and existing leases will not of itself cause a diminution in the value of those leases or in the underlying assets.

The clause remains subject to approval by the company’s lenders and now that a settled form of the clause has been agreed, this process will be commenced. The scale and timing of any further roll out beyond the initial specimen leases will be determined by the way the sector responds to the introduction of the clause that is now taking place and will be at the discretion of the company.

Commenting on the progress achieved, Michael Wrobel, chairman of Civitas Social Housing, said: “We are pleased to have reached agreement with the boards of several of our housing association partners for the terms of the new clause. We share the same objective of regulatory compliance and continue to make an active contribution in this regard. We consider the clause will be of benefit to the company’s stakeholders and to the sector overall.”

Steve Fensom, CEO, Westmoreland Supported Housing, added: “The board of Westmoreland is actively engaged in driving forward both the quality and overall compliance of the services that we deliver. Considerable progress has been made in this regard particularly in addressing the past issues raised by the RSH. We consider that the implementation of the new clause will assist further in our mission to achieve full regulatory compliance.”

Civitas Social Housing has reported a strong set of annual results for the year to 31 March 2022, posting a NAV total return of 7.0%. The group’s IFRS […]

Paul Bridge – Fund Manager Paul is the Chief Executive Officer within the Social Housing strategy. Paul has worked in all aspects of Social Housing for over 20 […]

Civitas Social Housing (CSH) has published a full response to short-seller criticisms that has led to a 25% fall in the group’s share price. ShadowFall, an investor that […]

In QuotedData’s morning briefing 14 September 2022: Middlefield Canadian Income (MCT) has posted its half-year results for the six months to 30 June 2022, during which time its NAV rose by 3.4% while its share price was also up by 2,5%. The Canadian stock market outperformed most global indices even though over the period. Two […]

Home REIT has continued its acquisition drive with the purchase of 158 additional properties for £57.4m. The acquisitions were funded by proceeds raised in the company’s oversubscribed £263m equity issue in May 2022 (of which the company has now deployed a total of £227m or 88% of the proceeds). The properties have added a further […]

In QuotedData’s morning briefing 13 September 2022: Infrastructure India (IIP) has applied for, and has been granted, a three month extension to the deadline for publishing its audited annual accounts for the year ended 31 March 2022, which are now expected to be published in early November 2022. Proceeds from the sale of Indian Energy […]

Civitas updates on portfolio – Civitas Housing Advisors has published an update on the Civitas Social Housing portfolio and some commentary on the social housing sector. This follows the release of a report on the sector from the Regulator. Coincidentally, The Regulator has announced the findings of its review of Encircle Housing. At the end […]