Woodford board wakes up 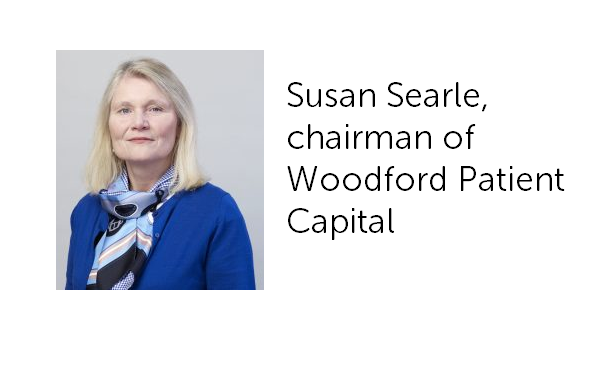 Woodford board wakes up – After weeks of virtual radio silence, the Woodford Patient Capital board has started to make some concrete plans for the future, although along the way it has lost one of its directors.

WPCT has a borrowing facility for up to £150 million and on 26 June 2019, approximately £126.0 million was drawn under the facility, which equates to gearing of 16.8 per cent. of NAV (maximum permissible gearing is  20 per cent. of NAV, measured at the time of borrowing.

Following discussions with shareholders, the board intends to reduce gearing over time. It has agreed a schedule with Woodford Investment Management Ltd (the manager) to reduce the level of gearing to below 10 per cent. within six months and to be generally operating ungeared within 12 months. The intention thereafter is for gearing to be used at lower levels primarily for capital flexibility (including investments) with the intention for any such gearing to be reduced by realisations shortly thereafter. Any draw down on the facility where the gearing exceeds 10 per cent. will require board approval.

While the company will be required over time to provide funding to some of its portfolio companies, it intends to achieve this, where possible, by using a proportion of the net proceeds received through disposals and realisations from the portfolio, a number of which are anticipated over the next 12-18 months.

[Our concern would be that this is too little, too late. If, as we suspect, the NAV falls over coming months, gearing will quickly breach the 20% limit. The board needs to tell investors at what point lenders start to demand their money back.]

Once the gearing is at a reduced level, if the Company’s shares continue to trade at a sustained and material discount to NAV, the company intends to undertake share repurchases in order to seek to mitigate the discount to NAV. Any share repurchase will be subject to the working capital requirements of the company, the company having sufficient distributable reserves at that time and the amount of cash available to fund such purchases. The board will also balance the need to use available capital for supporting investee businesses and its commitment to share buybacks.

[Our view – right idea but, barring some meaningful asset sales, highly unlikely in the foreseeable future]

The pricing of unquoted securities, in line with Financial Conduct Authority regulations, is solely the responsibility of the appointed Alternative Investment Fund Manager, Link Fund Solutions Limited. Link provides independent oversight of pricing and conducts its own Fair Value Pricing Committee with the support of an independent valuation firm it employs (“IHSMarkit”).

An in-depth valuation of each investment is performed independently by IHSMarkit using information publicly available, in addition to that supplied by the Company’s investee companies. A valuation occurs: (i) at the time of initial investment; (ii) with a semi-annual frequency thereafter; and (iii) as required where a ‘triggering event’ has occurred (where a ‘triggering event’ is an event that may materially impact the value of an investee business).

The independent valuation by IHSMarkit, as adopted by Link, is reviewed by Grant Thornton UK LLP as part of the half-year review and annual audit process which includes using their own valuation experts as required. This provides an additional measure to test the validity of the portfolio valuation.

The board is also aware that there has been commentary around the price at which WEIF may dispose of certain assets also held by WPCT. While this would be considered in the valuation process the context of the transaction is also considered.

The guidelines state that: “The objective of measuring Fair Value is to estimate the price at which an Orderly Transaction would take place between Market Participants at the Measurement Date. Fair Value is the hypothetical exchange price taking into account current market conditions for buying and selling assets. Fair Value is not the amount that an entity would receive or pay in a Forced Transaction…”

The valuation of the company’s portfolio is inherently subject to a degree of volatility given the early-stage nature of the company’s investments and will vary over time reflecting many factors taken into account by the independent valuer. The board believes it is equally important to consider the operational progress of the underlying businesses as value will ultimately be delivered through the commercialisation of the investee businesses and in that regard, the company continues to be confident in the long-term potential within the portfolio.

[Here we enter a potential minefield. Valuation is as much art as science when it comes to new companies with little or no revenues and profits. While it is wrong to think of calculating an NAV on a fire sale basis, we are not sure that investors would believe an NAV that ignored the valuations that WEIF sells its holdings for. This would entrench WPCT’s discount. We would expect to see much debate about this point in the press and at meetings with shareholders going forward.]

Since 3 June 2019 and the gating of WEIF, the board has introduced additional controls within WPCT to ensure that any of the following are brought to the board in advance of such transaction:

The board reiterates that it is independent of the manager and there are robust processes in place to avoid any conflicts of interest. It has a blend of experience including investing in and working with early-stage companies.

In a separate release today, the board has announced the appointment of Stephen Cohen to the board as an independent non-executive director. Stephen has committed to dedicating an enhanced amount of time to WPCT for an initial period following his appointment. It is also actively engaged to identify a replacement for Carolan Dobson, who has stepped down from the board today.

The board is also seeking a further independent non-executive director, in-line with its existing objective to evolve the board. Once the current recruitment process is complete, an evaluation will be made at that time to determine whether any further changes are appropriate.

[This story has a long way to run. We think one of the main problems that WPCT has is its gearing, which in extreme circumstances could threaten the survival of the trust and prevents it, for now from providing capital to support its existing investments. With the other Woodford funds in a similar position, some of these companies may struggle to get the funding they need and this could put valuations under pressure. Now it is down to the shareholders to decide whether they have confidence in the board. we would not be surprised to see more directorship changes in due time.]

WPCT : Woodford board wakes up

Schroder UK Public Private Trust (SUPP) has announced that it has made a commitment of CHF 3m (£2.7m) to antibody-drug conjugates (ADCs) development company, Araris Biotech AG, as […]

In QuotedData’s other news 28 June 2019 Origo Partners results to end December 2018 (ancient history now) show its NAV halving from 3.9 cents to 1.8 cents, down to: – (i) write offs of the company’s investments in Celadon, Gobi Coal, Staur Aqua, Fram, Six Waves, and Unipower; (ii) realised losses from the company’s sale of its […]