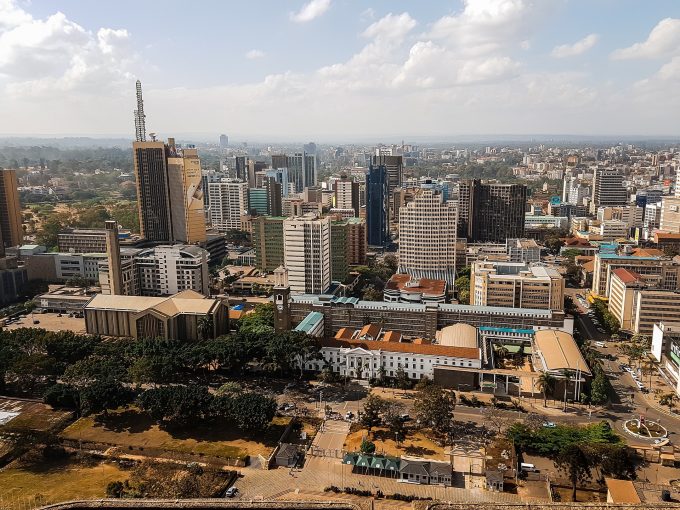 We have just published a note on Aberdeen Emerging Markets Investment Company, following a meeting with its managers, and our guest on this week’s news show was Ross Teverson, manager of Jupiter Emerging & Frontier Income. This week’s QD view picks up on some of the themes that came out of our discussions.

The first thing to note is that, on the face of it, emerging markets have been having a pretty good run since last year’s pandemic panic. There are a number of good reasons why that should be the case.

Governments have been pouring vast sums of money into their economies in an attempt to get things going again and this is raising the prospect of a synchronised global recovery.

This is already showing up in areas like rising oil and metal prices, which is good news for some emerging markets countries. However, it is important to remember that these are not just plays on commodity exports. Most of the companies that managers of emerging markets funds are buying are in sectors such as technology, financials and consumer services.

The US dollar has been weakening. There is a chart in the AEMC note that tries to illustrate this – see page 6 of the note. Generally, when the dollar goes down, emerging markets go up. The reasons for this aren’t clear – the effect on commodity prices perhaps, or a fall in the cost of servicing dollar debt. One idea is that, freed from worrying about their exchange rates, emerging market governments can go for faster growth. Another, is that a weak dollar is actually caused in part by investors looking elsewhere for riskier but more rewarding investment opportunities. Regardless, the two are related and this relationship has been working again over the last few months.

Also, emerging market stocks are cheaper on average than their developed market counterparts, despite offering the potential for faster earnings growth.

The rally has been driven by China

The managers of Aberdeen Emerging Markets are a bit more cautious than they were, but both they and Ross highlighted one reason why the emerging market rally might have further to go: for the most part, many emerging markets and most frontier markets haven’t been participating in the rally.

There is another chart in the note which I have reproduced below. As you can see, over the 12 months ended 28 February 2021, every market underperformed the MSCI Emerging Markets Index except for China, Korea and Taiwan. 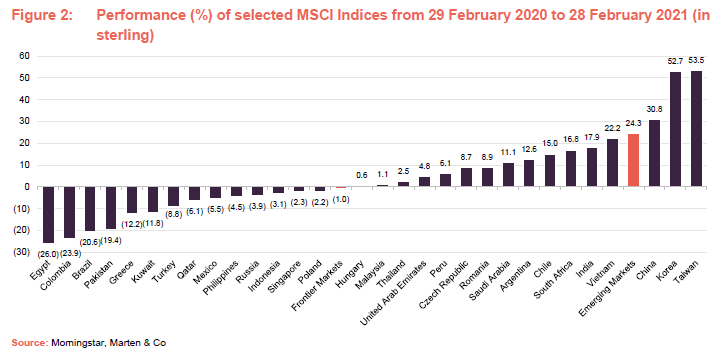 At the end of that period, China was 40% of the index and the other two accounted for further 27%. Many Chinese stocks may be starting to look pricey after such a strong run, but the picture in other emerging and most frontier markets is quite different.

The Aberdeen team have been taking some profits on their Chinese funds and reinvesting in areas it thinks are cheap, such as Russia.

Jupiter Emerging & Frontier Income didn’t have much exposure to China to begin with (on valuation grounds) and this has held back returns. A broadening of interest to smaller markets could make a dramatic difference to its fortunes.

Both sets of managers are more positive on the outlook for India than they were. Investors are monitoring progress with India’s COVID-19 vaccination programme – as we know, it recently decided to block vaccine exports to cope with internal demand. Ross highlighted the reforms that the Modi government has introduced to make its economy more efficient. India Capital Growth published results on Friday morning, which show much improved returns from that fund, following a revamp of its investment process. The Aberdeen managers have been buying Ashoka India Equity.

Ross’s style is to focus on companies, not markets. For example, he sees opportunities in emerging market banks – where genuine growth can be achieved as more of the population starts to use bank accounts and other financial products for the first time. This chimes with the views of the Polar Capital Global Financial team, who have been building their emerging markets exposure.

This theme may have further to run.

Aberdeen Emerging Markets (AEMC) and Aberdeen New Thai (ANW) have announced a comprehensive set of proposals that, in the case of AEMC will see it change its investment […]

In QuotedData’s morning briefing 28 July 2021: Literacy Capital (BOOK) has acquired a majority stake in OFJ Spring Topco Limited, the holding company for Oxygen Freejumping, which is an […]

India has made major headlines since the start of the year as it has been hit by one of the deadliest waves of the coronavirus pandemic, with almost […]

Good performance for Aberdeen Emerging Markets but board frustrated by discount