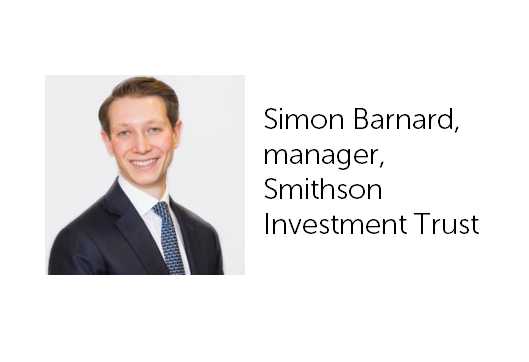 Smithson supporters stock up – money floods into investment trust on back of second year of strong performance. Smithson Investment Trust has published results for the year ended 31 December 2020. It was a year of strong growth for the trust as it generated a return on NAV of 31.4% and a share price return of 31.7%, far surpassing a return of 12.2% generated by its benchmark, the MSCI World SMID Index. The continued good performance encouraged the inflow of considerable new money. £398m of new money was more than any other trust in 2020. By the end of December the trust had net assets of £2.3bn. Expenses exceed revenue and so there is no dividend.

The manager’s statement describes the changes to the portfolio. In line with the investment policy, these only involved transactions in a handful of stocks.

“The initial decline of the market induced by the pandemic in late February 2020 appeared indiscriminate, which it often is during a market panic. During this period we used our available cash to buy more of those companies whose share prices were suffering, but which we felt had the strongest long-term outlook. This included industrial businesses such as Cognex, a manufacturer of automated vision systems used with factory and warehouse robots, as well as technology companies such as Verisign, which manages and protects the ‘.com’ domain of the internet.

As the market turmoil continued into March, the share prices of those companies likely to be significantly negatively impacted by the crisis, such as travel and leisure, accelerated their decline, while those that stood to benefit from the pandemic started to increase in price. We therefore found ourselves with increasingly large positions in several healthcare names including Ambu, Masimo and Fisher & Paykel Healthcare, with valuations far less attractive after their sharp price appreciation. It was at this time, around the middle of March, that we started trimming our positions in healthcare, which released capital to allow us to acquire more shares in our existing travel, leisure and industrial names, as well as to start three new positions.

These included a position in Rational, a producer of automated professional ovens for restaurants and mass catering venues. Based in Germany, Rational is the market leader in professional combi-steam ovens, which use both convection and steam to optimise cooking. One of Its main products, the ‘SelfCookingCenter’, allows significant automation of the cooking process as the software in the oven recognises the size, shape and consistency of the food and can control the cooking process to achieve the desired result programmed by the chef; it then self-cleans. This allows significant cost savings in the kitchen, as fewer chefs are required. Rational now has 54% market share of a product that has only 30% market penetration. While there are a number of competitors, they are much more diverse in their product offering; Rational’s specialisation means it focuses on just two types of ovens, and only on professional kitchens, which other, typically larger companies, may not see as worthwhile to focus on.

Due to the impact of social distancing measures on the restaurant and catering trade, the shares of the company declined 44% between the start of the year and when we began buying. However, given its competitive advantage of having the best technology and most focused research and development capabilities, with the resulting high returns on capital and strong cash flow, as well as plenty of cash available on its balance sheet, we believe the company will be able to exit the crisis in a good position. Indeed, the share price eventually ended the year above the prior peak achieved just before the pandemic.

We also bought two companies within the cybersecurity industry. Qualys was founded in 1999 and sells to more than 15,000 customers in over 130 countries, from small companies up to multinational enterprises such as Microsoft. Qualys is one of a small number of companies to provide identification, security and vulnerability management across remote devices attached to a corporate network. This was already gaining in importance before the pandemic but with the combination of the proliferation of networked devices, the growing adoption of the cloud and the seemingly inexorable increase in sophistication of cybersecurity attacks, demand for its security services are likely to continue to expand at a healthy rate. The company grew its free cash flow by 30% in 2019, and will stand to benefit strongly from any permanent shift towards remote working brought on by the pandemic. With the subscription nature of its business promoting strong cash generation, we were able to invest at a free cash flow yield which is better than the portfolio average despite the attractive growth prospects.

Although within the same subsector as Qualys, Fortinet focuses on slightly different aspects of cybersecurity. Founded in 2000, it sells security appliances such as firewalls to corporate and home users, as well as security software. Fortinet is actually in exactly the same business as another of our holdings, Check Point Software Technologies. We were originally attracted to Check Point because of the size of its established client base (like many types of software, once security software and systems are in place within an organisation it becomes very expensive and disruptive to change) and its industry‑leading operating margin of almost 50%. However, we had become increasingly concerned that the growth of the company, previously a very acceptable high single-digit rate, had recently slowed to around 4%. This is somewhat below the rate we expect from our companies. Not even a higher sales and marketing expense, leading to a depletion of that aforementioned margin, was having a positive effect on growth. At the same time, Fortinet was experiencing quite the opposite dynamic, with annual revenue growth of over 20% during the last five years and a steadily improving operating margin. It was becoming increasingly clear that, likely due to better value products, Fortinet (among others) was consistently taking market share from Check Point, a scenario that, given enough time, wasn’t going to end well for Check Point. We therefore decided that we would switch allegiances and Check Point was sold to fund the position in Fortinet.”

EasyJet has grounded its entire fleet on a morning that has also seen the price of crude oil fall below $20 (an 18-year low). Jupiter UK Growth (JUKG) […]

Smithson powers on – 2019 was a great year for Smithson Investment Trust and its results, which cover the period from the launch of the trust in October […]

LondonMetric doubles down in Milton Keynes

Biopharma Credit looking healthy – BioPharma Credit has published its annual report for the period ended 31 December 2020. Highlights are: NAV was fairly flat during the period, decreasing by $0.018 from $1.0217 to $1.0037 8.29 cents per share in total dividends during period, comfortably ahead of the target to distribute at least 7 cents per […]

In QuotedData’s morning briefing 16 March 2021: Hipgnosis plans to publish additional financial information which will help investors understand the underlying performance of its portfolio of songs. At the moment, purchases of new songs distort the company’s income. We now know that the portfolio of songs held on 31 December 2020 would have produced total revenue […]