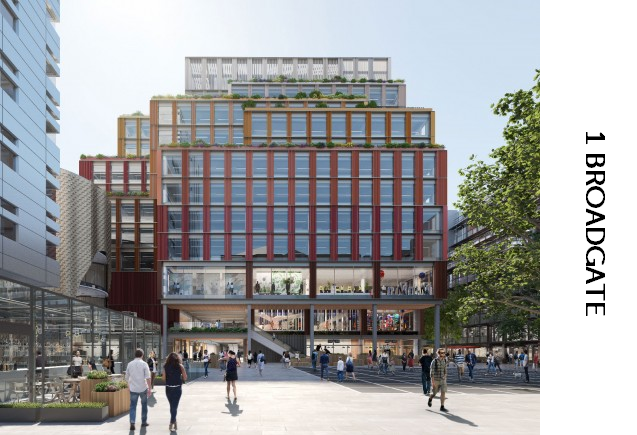 British Land has pre-let 134,000 sq ft of office space at its 1 Broadgate development in the City of London.

It has signed a deal with real estate consultancy firm JLL on a 15-year term. The deal represents almost 30% of the office space in the new 546,000 sq ft mixed-use scheme.

Demolition of the existing building is due to start May 2021, with completion of the new construction expected in 2025.

British Land said the building will be the most energy efficient it has ever delivered, targeting a base build operational efficiency of c.55 kWheq per m2 already ahead of the company’s 2030 energy intensity targets for new developments. The building will target a BREEAM Outstanding rating, which has recently been achieved at British Land’s 100 Liverpool Street.

It will target the WELL Platinum rating for wellbeing to achieve industry leading standards for air quality, water and light, and will be designed to support employee engagement and productivity. It will also be SMART enabled to analyse and optimise operational performance.

The planned 1 Broadgate redevelopment will replace the former headquarters of inter-dealer broker TP ICAP Group and include 498,000 sq ft of offices, as well as restaurants, stores and bars.

Corporate companies seeking new state-of-the-art space are being forced to pin down new premises several years in advance due to a lack of developments coming forward. This is creating a two-tier market, where rents for the best new buildings remain high while older, secondary buildings are seeing rents stall as a surplus of space, mainly for sublet by firms that are shrinking, comes to market.

Simon Carter, chief executive, said: “The move is a real vote of confidence in London, a further endorsement of our campus strategy, and of Broadgate’s status as a world class, mixed use destination. This news follows the successful delivery of 1FA, 135 Bishopsgate and, most recently, 100 Liverpool Street, and marks the start of the next phase of our Broadgate masterplan.”