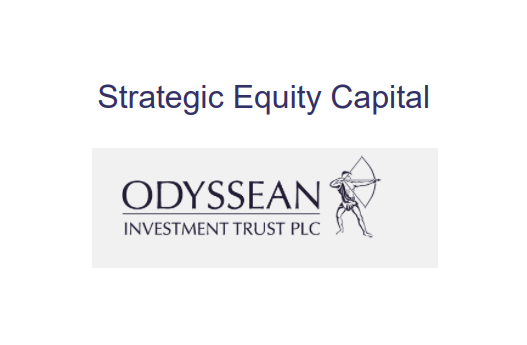 Odyssean makes approach to Strategic Equity Capital – Odyssean has this morning made the following announcement:

“The board of Odyssean Investment Trust plc (“OIT”) announces that it has made a proposal to the Board of Strategic Equity Capital plc (“SEC”) regarding a combination of SEC and OIT to be effected by way of a section 110 scheme of reconstruction by SEC and a transfer of assets to OIT (the “Transaction”). The combined entity would be managed by Odyssean Capital LLP under the existing OIT investment strategy.

OIT has received letters of intent supporting the Transaction from SEC shareholders representing 32.9 per cent. of the issued share capital of SEC.

The Board believes the combination of OIT and SEC presents a unique opportunity to create a leading investment trust differentiated from the wider UK small cap sector. The combined entity would have a long-term supportive shareholder base, strong shareholder liquidity and discount control mechanisms, a premium rating and greater scale, and this would be of long-term benefit for both sets of shareholders.

The discussions between OIT and SEC are at an early stage and accordingly there can be no certainty that terms of the Transaction can be agreed. A further announcement will be made in due course.”

“The board of Strategic Equity Capital plc (the “Company”) announces that it has received an unsolicited proposal from the board of Odyssean Investment Trust plc concerning a proposed combination of the two companies. Pursuant to the proposal, the combination of the two companies would be effected by means of a section 110 scheme of reconstruction.

The board will consider the proposal in conjunction with its advisers and will make a further announcement in due course. Shareholders are advised to take no action in respect of the proposal at this stage.”