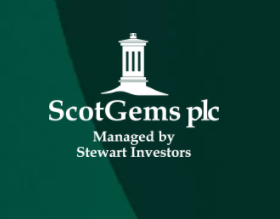 On 9 March 2022, the board of ScotGems announced that it had received notice from First Sentier Investors (UK) Funds Limited that it wanted to terminate its management agreement.

The board says that it has considered carefully the future of the company including reviewing a number of proposals made to the board and consulting with the company’s largest shareholders. Throughout this process the board has taken into account the size of the company, the discount and the limited liquidity in the company’s shares.

A further update will be provided in the next few weeks.

[We are in a very similar situation here to that of Jupiter Emerging and Frontier Income. There is no trust in the sector that is trading at asset value or a premium and would make a perfect rollover vehicle. If that was the preferred route, the best option would be Mobius, which could do with being a bit bigger, but is trading on a 2.7% discount. We wouldn’t be in favour of a rollover into an open-ended vehicle. Liquidating the portfolio and handing back the cash, so that investors can reinvest in the sector at a discount should they choose, makes sense to us.]

ScotGems (SGEM) has announced its annual results for the year ended 31 December 2021. During the period, the trust’s NAV rose by 8.2%, yet its share price fell […]

The global emerging markets company, ScotGems (SGEM), which invests in small-caps, has published its annual accounts to 31 December 2019. It was a difficult year results-wise with SGEM’s shares […]

ScotGems reports losses in year-end results – ScotGems plc has announced their results for the year ended 31 December 2018. The company’s objective is to invest in diverse, […]

In QuotedData’s morning briefing 13 May 2021: Barings Emerging EMEA Opportunities (BEMO) has announced that Maria Szczesna, one of its investment managers, and a member of the Barings EMEA Team, has decided to step down from her portfolio management responsibilities to return to her home country for family reasons. Maria will remain with BEMO until […]

UK Commercial Property REIT (UKCM) has acquired a hotel development opportunity in Leeds for £62.7m from Marrico (Sovereign Square) Ltd, a joint venture between Marrico LLP and Helios. The group will fund the development of the 305-room hotel, which will be completed by Marrico. The 12-storey hotel is scheduled to complete in 2024 and will […]