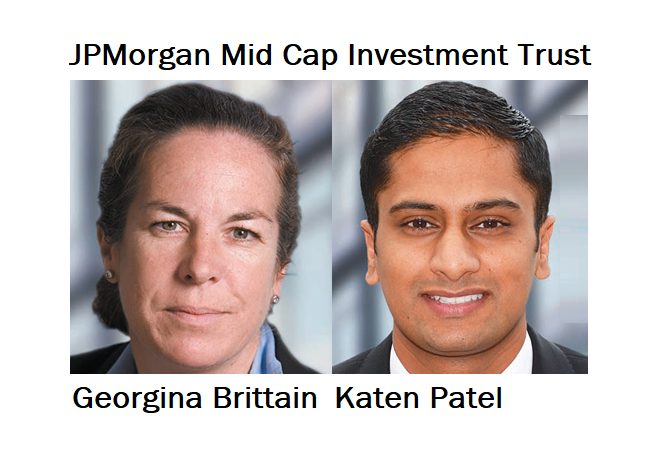 JPMorgan Mid Cap Investment Trust has published results for the year ended 30th June 2022. The chairman points out that it was a year of two halves. For the six months (to 31st December 2021), when the story was about the recovery from COVID, the NAV total return was +5.5%, just about matching the return on the FTSE 250 Index (excluding investment trusts) of +5.7%.

The second half of the financial year was all about the market’s reaction to the invasion of Ukraine, with consequent rising commodity and energy prices leading to a surge in inflation well above previous expectations. For the year to 30th June 2022 as a whole the NAV total return was -30.4%, well behind the FTSE 250 Index (excluding investment trusts) return of -16.1%. In addition, the discount widened from 2.1% on 30th June 2021 to 13.6% on 30th June 2022 resulting in a “very disappointing” share price total return of -38.4%.

The portfolio had an unhelpful bias to the consumer discretionary sector which suffered as its trading outlook deteriorated. In addition, ‘growth’ stocks were de-rated (reflecting anticipated higher rates of inflation and the impact of higher interest rates on the valuation of future cashflows). In addition, the trust began 2022 with gearing of 7.7% which amplified the market fall.

Revenue earnings per share increased by 68% from 20.3p to 34.1p. The board has decided to maintain the dividend at 29.5p to help rebuild revenue reserves following the impact of COVID on the revenue account.

Unfortunately, the deterioration in performance came just as the company stepped up its marketing efforts. In the end, 919,040 shares were purchased and held in treasury over the period. These shares were purchased at an average discount to NAV of 12.3%, enhancing the NAV by 5.6p per share for ongoing shareholders.

A few of the portfolio’s largest and long-held positions positively contributed to performance over the year, such as OSB and Computacenter, (our two largest holdings at the time of writing), and we also benefited from the outperformance of holdings such as Indivior and Man Group, and the bid for Brewin Dolphin. However, the share prices of a number of our largest positions such as Future, Dunelm, JD Sports and Games Workshop declined precipitously as the market de-rated these consumer exposed names, despite a notable lack of downgrades from company guidance. With hindsight, we should have acted more quickly, but our analysis of the specific outcome for these individual companies was very much counter to the market perception.

While we did reduce the sizing in several of these positions, the magnitude of the market de-ratings (averaging a 35% decline on minimal analyst downgrades) has led us to maintain holdings in all of the above names, given their current valuations and long-term prospects.

That said, we have of course made a number of significant changes to the portfolio in 2022, given the dramatic change in outlook in both inflation and consumer confidence in the first quarter of 2022. Among the many changes to the portfolio, we have increased the energy exposure with positions in Energean and Serica (gas producers) and Harbour Energy (oil and gas producer), and also bought into the defence company Chemring and the utility play, Telecom Plus. At the same time we have significantly reduced our consumer exposure as the outlook worsened. Among the exits from the portfolio are Moonpig, Curry’s, Mitchells & Butler and Restaurant Group. We have also sold out of DIY companies such as Wickes and Travis Perkins. Other sells of note have included Royal Mail and Rank Group.

Overall we have significantly reduced our exposure to the UK consumer, but continue to believe that a number of consumer-facing companies will weather the economic downturn well and continue to take market share; and we strongly believe this is not reflected in current share prices. At the same time, we have increased our holdings in a number of more counter-cyclical names, such as Indivior, Beazley and Serco. We believe we have positioned the portfolio to have a balance between the more defensive and counter-cyclical companies and the very undervalued more cyclical holdings; on all the key metrics that we look at, the portfolio compares favourably with the benchmark, which will hopefully serve us well when market sentiment shifts.

A bumper year of outperformance for JPMorgan Mid Cap

JPMorgan Mid Cap has announced its annual results for the year ended 30 June 2021, which show that it had a bumper year of outperformance that was derived […]

JPMorgan Mid Cap has published results for the year ended 30 June 2016. The end of the period was marked by the referendum. The Mid Cap index fell just […]

JPMorgan Mid Cap says, over the six months to 31st December 2015, the Company’s total return on net assets was 9.0%, 8.4 percentage points ahead of the Company’s […]

JPMorgan Japanese (JFJ) has published its interim results for the six-months ended 31 March 2022. The period is one that has seen investors rotate away from the kind of high quality and high growth companies that JFJ focuses on (its manager runs a high conviction, unconstrained approach focused on finding the best investment ideas in […]

JPMorgan Global Growth & Income (JGGI) has published its annual results for the year ended 30n June 2021, which its chairman, Nigel Wightman, describes as “another very satisfactory year for the Company”. During the year, the company’s benchmark, the MSCI AC World Index expressed in sterling, rose by 24.6%. JGGI’s returns were considerably better – […]

JPMorgan Asian Investment Trust (JAI) has announced its final results for the year ended 30 September 2018. During the year, JAI’s return on net assets was +7.3%, representing an outperformance of 2.9 percentage points over the benchmark, the MSCI AC Asia ex Japan Index, which returned +4.4% in sterling terms. The chairman, Bronwyn Curtis, says […]

JPMorgan Japan Smaller Companies Trust reports that its NAV return for the half year ended 30th September 2016, was 14.1% (15.4% adjusting for the effect of the subscription shares), versus 22.5% for the benchmark. The share price total return was 16.5%. The Board was notified during the period of Naohiro Ozawa’s decision to resign from […]

The chairman of JPMorgan Claverhouse says its performance in the first half of the year has been disappointing after several years of very good returns. The net asset value total return of -2.0% for the six months to 30th June 2016, compared with the return from the benchmark, the FTSE All-Share Index, of +4.3% over […]

LXI REIT is considering an equity raise to part-fund the £500m acquisition of a portfolio of 18 Sainsbury’s supermarkets. The group said that it was currently in discussions to acquire from Sainsbury’s, on a sale and leaseback basis, the 18-strong portfolio of prime grocery store assets, which are predominantly located in Southern England locations, but […]

Tritax EuroBox has announced that Nick Preston has stepped down as fund manager of the company and has been replaced by Phil Redding, a partner at Tritax EuroBox’s manager Tritax Management. Phil joined Tritax in November 2020 as director of investment strategy, providing strategic investment advice across four flagship Tritax funds. Prior to joining Tritax, […]