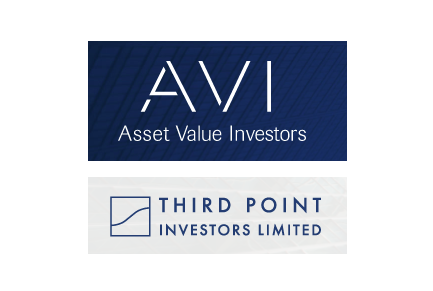 AVI calls for review and appointment of new independent director in latest saga with Third Point – Asset Value Investors, manager of the AVI Global Trust (AGT), and three other shareholders representing over 18% of Third Point Investors Limited (TPIL) ordinary shares, have requisitioned the board of TPIL to convene an EGM at which shareholders will be asked to vote on a resolution to appoint Richard Boléat as a new independent director.

Richard has deep experience of the London-listed investment companies’ market and a reputation for adhering to and promoting sound corporate governance principles. He has no current or historic affiliations or relationships with any of the requisitioning group, nor any conflicts that would prevent him taking on the role.

AVI said what began as a dispute over discount control mechanisms has, through the actions of the board, exploded into a fully-fledged corporate governance crisis. In the words of one sell-side commentator, it is now “a battle for the soul of investment trusts’ governance”.

A copy of AVI’s letter to TPIL’s shareholders can be found here. We have also included an extract below.

Extract from letter to shareholders:

At a high level, we would hope to see a review of the Company’s governance and discount control mechanisms, and a properly independent investigation of where things have gone wrong. More specifically, and while not intended to be an exhaustive list, we believe the following are key issues:

(i) A Review of the Company’s Structure and Voting Rights – Any notion that the Company’s precise structure is a necessary evil required for regulatory reasons – and that the Board’s hands are in some way tied – should be rejected outright. To recap, London-listed investment companies with a large percentage of US shareholders are in danger of losing their foreign private issuer status (if US ownership were to exceed 50%) and thus being forced to register under the US Investment Company Act.

(ii) A Review of TPIL’s Discount Control Mechanisms and Investigation into the Strategic Review – We know Shareholders harbour grave concerns as to the integrity of the Strategic Review that began in Q4- 2020 and culminated in an underwhelming set of discount control measures, noting again that the consultant hired to lead the process was introduced by Third Point to the Board and that our extensive discussions with other Shareholders show that the measures announced did not accurately reflect the feedback received. What was the role of the Manager in this process?

(iii) A Review of Board Communications Policy – The statement announcing the EGM results issued on 1 December 20213 was misleading and evasive. But not content with this, the Board’s 23 December 2021 statement4 alleging socalled “personal threats” against the Chairman saw them double down on their strategy of gaslighting the Company’s own Shareholders as to the results of the recent vote. While observing that Staude Capital’s subsequent letter robustly debunked the claims of “personal threats”, we also note that the opening line of the Board’s statement again claimed that Shareholders “rejected” our resolution to remove Joshua Targoff with no acknowledgement of the role played by VoteCo, and that the statement from Mr. Loeb at the end also boasted that Shareholders had “reject[ed]” our motion.

In addition, anyone reading that “the Board….promptly arranged an in-person meeting with a representative of AVI and separately with representatives of Staude Capital” is likely to infer that the Board were pro-active in initiating contact when, in reality, the meetings were organised following approaches from the shareholders in question. While a relatively minor point, this is yet again indicative of the Board’s mendacious approach to communications.

This is not normal behaviour from a publicly listed company, nor should it in any way be accepted. Who is writing these statements? What role does the Manager play in crafting them? To what extent are PR companies being used? And how can supposedly independent directors be happy with these disingenuous announcements going out in their name?

Asset Value Investors (AVI) has launched a public campaign on the submission of its shareholder proposals to NS Solutions, a subsidiary of Nippon Steel Corporation. NS Solutions is […]