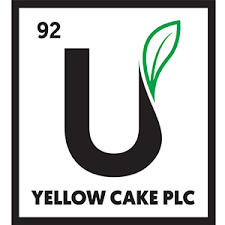 Yellow Cake reports NAV uplift on Uranium price rise – Yellow Cake plc (YCA), a specialist company operating in the uranium sector with a view to holding physical uranium for the long term, has released an operating update for the quarter ending third calendar quarter of 2018.

This is the company’s first quarterly operating update since it came to market in July 2018.  At IPO, which was over subscribed, the company raised £151 million (US$200 million).  The update reports on progress of the company to use the capital to acquire underlying physical uranium reserves.  Yellow Cake invests in Triuranium octoxide (chemical symbol U3O8 ).  U3O8  is  is a compound of uranium, makes up about 70% of what is referred to as ‘yellow cake’ and is the form in which uranium is commonly stored, transported and processed, as it is relatively stable and straightforward to handle. It is converted into Uranium hexaflouride before it is enriched and used in the nuclear power industry (or for military purposes).

Purchases by Yellow Cake include, to date:

The total holding of uranium by Yellow Cake are 8.44 million lb, which have been acquired at an average cost of US$21.10 /lb against a current spot price of $27.35 /lb.

Recent changes in the uranium market

There has been a steady improvement in the market fundamentals for U3O8.   The spot market price increasing from US$22.85 /lb to US$27.35 /lb since IPO.

The company reports that there has been strong trading in the commodity in the quarter which has been an equivalent average per month of approximately 12.0 million lb U3O8.

In the update, the company reports that a number of operators have slowed down their output.  They refer to Kazatomprom and Cameco as having reduced supply. In the report, Yellow Cake writes that it estimates that “the supply reductions from the largest producers of uranium alone will take c. 30 million lb out of the market, resulting in a shortfall in 2019 of c. 40 million lb U3O8 based on expected global demand of 174 million lb.”

The company notes that the demand for the commodity remains strong, which supports the price.  Japan has a major nuclear power development plan and China has “a total of 43 operating reactors (40.7 GWe) and an additional 15 units (15.2 GWe) under active construction.”

The combination of reducing supply and supportive demand, leads the company to expect the buying of uranium in the spot market to continue. The company writes; “Looking forward, during the fourth quarter, current market trends are anticipated to continue as investments in physical uranium, trader purchasing and producer buying dominate the near-term market”.

Yellowcake benefits from higher uranium price – Yellowcake has published results covering the year to the end of March 2019. Highlights are: Net asset value of USD2.93 (GBP2.25) […]

Yellow Cake closer to critical mass – Yellow Cake, the investor in physical uranium, has just announced that 12,000,000 new shares have been placed with existing and new institutional […]