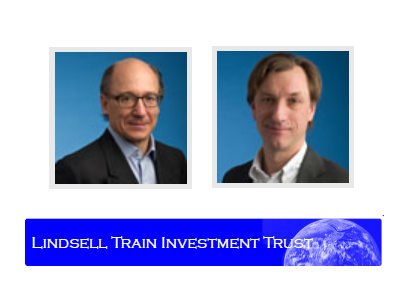 Given the fall in the share price, the manager elected not to take its performance fee. All credit to it for this but we see little logic in it. Both the board and the manager (and us) have continually warned about the dangers of buying these shares on an excessive discount. All the directors bought shares when the shares moved to trading at a discount.

“Turbulent markets present a challenge in valuing any unlisted company and the board focuses with great care on its valuation of Lindsell Train Limited (LTL), not least because it remains the most significant investment in the company’s portfolio at 46.8% (45.9% at 31 March 2019) of NAV. At the end of March 2020 the board decided to apply an adjustment to the inputs used to calculate LTL’s valuation. The aim was to ensure that the valuation captured the full effect of the decline in LTL’s funds under management (‘FUM’) as markets fell, and to reflect the sharp fall in the values of listed fund managers. The board has used two methodologies to value the company, weighted equally. One values LTL at 1.5% of its FUM and this input remains unchanged. The other element uses an estimate of LTL’s historical annual notional earnings. The earnings based valuation took time to capture the effects of declining FUM as it was based on three month rolling data. From 31 March 2020 valuation and into the future, the board has decided to calculate LTL’s notional earnings with reference to LTL’s most recent end month FUM (see page 75). In the month of March this resulted in a 17.2% decline in the earnings calculation and a 13.4% decline in LTL’s overall valuation.”

“Despite the turbulence in markets impacting its FUM, LTL made good progress in a difficult year for the industry in general. Its valuation increased by 8.7% despite the adjustment mentioned above. Add to that the dividends paid and its total return for the year to 31 March 2020 was 21.4%. This made LTL once again the largest contributor to the company’s returns over the year. It proved to be a year of two distinct halves for LTL’s FUM, which rose to a peak of £22.7bn in August only to plateau and then decline in the first quarter of 2020 due to both market moves and net outflows. LTL’s FUM at 31 March 2020 was £18.2bn, almost the same level as at 31 March 2019, having recorded net inflows of £759m over the year. Throughout all the turbulence LTL’s investment performance has remained impressive. Provided this continues it bodes well for the future even against a difficult background for the active management industry. The ongoing progress in LTL’s FUM sourced from the USA is also encouraging; they increased again this year and show every sign of building further in the future.

One new stock, Laurent Perrier was added to the portfolio. London Stock Exchange moved up into the top spot after strong performance.

The independent directors of The Lindsell Train Investment Trust have decided to change the way that the trust values its stake in the management company. It will apply […]

QuotedData’s weekly news show 18 June 2021 Thank you to everyone that listened in today, whether you watched the Zoom live, on Facebook or on Youtube. In this […]

QD view – step off the train?

The world is a different place than it was 18 months ago. COVID-19 and the ramifications of the lockdowns used to contain it have changed the investment landscape […]

LONDON (Alliance News) – The best performer in both price and net asset value terms in the third quarter was UIL Ltd, boosted by its largest investment, Australian-listed […]

Witan’s results for the year ended 31 December 2014 show them generating a return on net assets of 6.6%, 1.1% ahead of their benchmark (a composite of four different regional FTSE All-World Indices) and well ahead of the 1.2% return on the FTSE All-Share Index. The share price total return was 15.1%, enhanced by the move […]