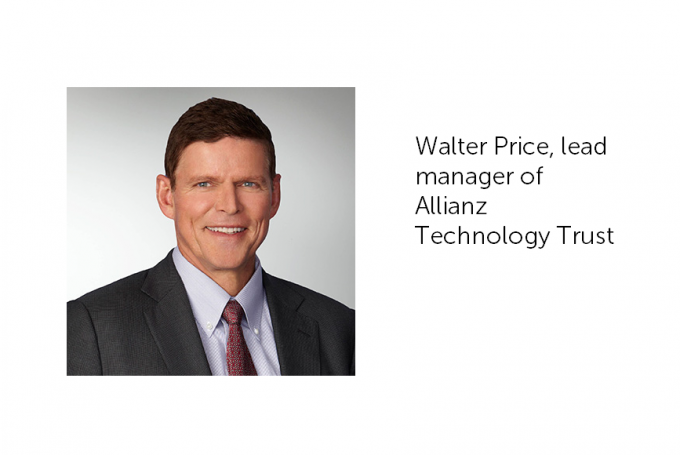 Allianz Technology announces results as Walter Price prepares to stand down – Allianz Technology reports that, over the year ended 31 December 2021, the NAV return was 19.4% and the shareholder return 18.7%, whilst the benchmark Dow Jones World Technology Index (sterling adjusted, total return) increased by 28.2%. As usual, there is no dividend.

Mike Seidenberg will take over from Walter Price as lead portfolio manager in July 2022. Walter recruited Mike to his team in 2009 and Mike has taken an increasingly active role in working with Walter  in recent years. Walter will continue to directly support Mike at least until the end of this year and the board does not expect this transition to cause any change in AllianzGI’s approach to managing the portfolio.

The manager says that “The reasons for the underperformance are straightforward. The Company has had a long-term overweight to the highest growth technology companies – finding these pockets of innovation when they hit their sweet spot for growth is part of the Company’s DNA. It was these areas that were hit hardest as the market reappraised valuations in light of rising interest rates.

The only high growth companies that continued to do well were the megacaps such as Microsoft and Apple. While we hold both these companies, they appear in the index in far higher weights. In Apple, for example, we had a 2.4% average weighting, but this is an 11% underweight compared to our benchmark index. Microsoft was up 54% over the year, and we had an 8% underweight – while still holding an average 4.5% position over the year.

The underweight to Alphabet also hurt performance for similar reasons. Alphabet was up 67% as it exceeded earnings. It saw a significant hit in earnings in 2020 as the advertising market collapsed, which meant its year on year numbers looked good.

We are disinclined to shift our position on this. These are strong companies, returning cash to shareholders, but they are vulnerable to swings in sentiment. Capital has moved to these areas as much for their perceived stability as their fundamentals. We like the fundamentals, but not enough to allocate almost 30%-40% of the portfolio to just a few stocks. This adds little value for our shareholders over and above a tracker.

Nevertheless, we have shifted our positioning on cyclical companies, increasing our exposure to semiconductors. There are some attractive fundamentals for this part of the market. The industry is more consolidated, prices are higher and there is still huge demand for semiconductor content across a broader range of industries. As such, it is benefiting from stronger fundamentals and a cyclical rotation.”

With respect to individual stocks…

“Amazon has been a significant stock detractor over the year. The benchmark doesn’t hold it, but we had a 3.7% weighting. It was up just 3.3% over the year. It had a strong 2020 as investors turned to online shopping when stuck at home. However, this gave the group tough earnings comparisons for 2021. At the same time, ecommerce did not sustain the gains it made in 2020 as people returned to stores.

Elsewhere, our overweight positions in Paycom, Okta, Block Inc (formerly Square), and Crowdstrike detracted from overall performance. They are all high growth companies, with ambitious valuations relative to earnings. There were also some concerns on the competitive landscape for Crowdstrike and Okta during the year, though we believe both companies will head off this pressure with relative ease.

That said, a number of our high growth stocks have seen strong earnings outpace valuation compression. Productivity tool Asana, for example, has benefited from agile working as companies sought to automate tasks. It gives companies visibility of work flows and, once implemented, companies tend to stick with it, giving it recurring revenues. It should make work more efficient, while also allowing workers to focus on higher priority activities. It was up 155% over the year.

Security company Zscaler also had a good year, rising 62%. We would also highlight payments group EPAM, while Tesla also performed well. The group has exceeded production targets, having created multiple production facilities around the world. It is working out how to produce cars more profitably.

The Company also benefited from the companies we didn’t hold. We were already underweight in Alibaba and Tencent at the start of the year and quickly exited both positions as the direction of travel from the Chinese government became clear. The benchmark weighting in each company is around 5%. Both stocks saw significant sell-offs during the year and did not recover. We still consider the Chinese government’s intervention to be a huge risk for investors.

At the start of 2021, we had only 1.7% of the portfolio invested in Chinese companies. By the end of the year, and indeed currently, we have no Chinese holdings.”