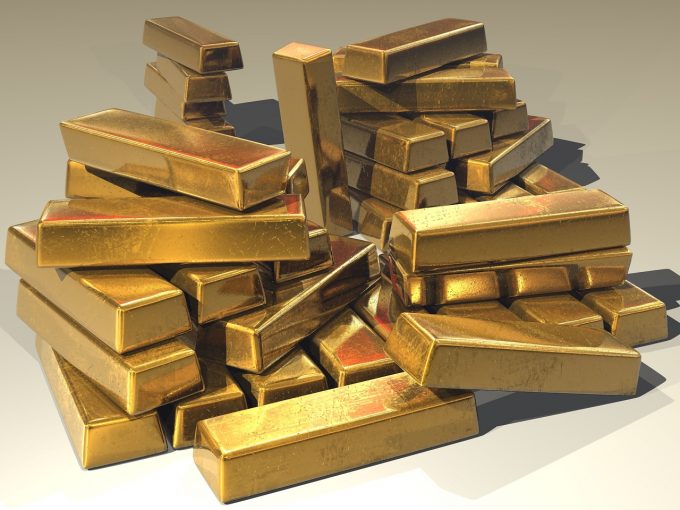 QuotedData takes a look at gold after its best month in years – We recently published our July economic and political roundup (click here to access it), which consolidates extracts of statements from managers and chairmen of investment companies. Although markets were up in June, there is little doubt that these are tense times, in the UK with Brexit and a leadership change to come, and globally, where growth is slowing and it is anyone’s guess as to how the US/China trade war will play out. We can also add the US’s worsening relationship with Iran to the mix.

On the back of the macro roundup, we found the recent revival in gold particularly interesting, after several pretty lacklustre years. The price of gold hit a six-year high in June, which turned out to be its best month in about three years. For those that pay attention to technical indicators, the fact that the price broke through resistance at about $1,350-1,360, which has held back advances for the best part of five years, was a big deal. 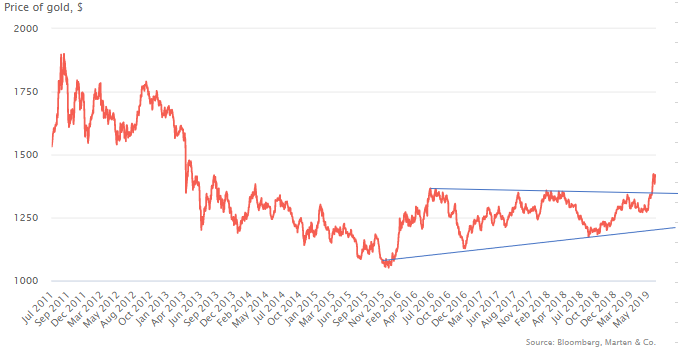 Of course, gold has been a store of value for hundreds of years and there is no shortage of risks globally competing to drive capital away from stocks and into safe havens like bullion. What is especially fascinating here is the rate at which gold has shot up. This has come after a number of poor years since 2011, including periods where it might have been expected to perform better. Since 2011, the rise of cryptocurrencies has opened up a whole new alternative asset class while ESG investing has also come to the fore; both are thought to have worked against gold.

These are some of the factors that are thought to be behind the resurgence:

CQS Natural Resources told us when we met them in May that gold is still a relevant form of portfolio insurance, offering a degree of inflation protection, while it tends to perform well in times of market dislocation. Their view was that precious metals mining equities offer a superior way of gaining exposure to the gold price and the portfolio protection that it offers, given their attractive valuations.

Seneca Global Income & Growth (SIGT) also like gold. Manager, Peter Elston, told us that as they continue to trim their allocation to equities, they were buying gold physically and equities. In his view, gold represents better value than expensive government bonds. He adds that gold looks good value on a long-term inflation adjusted basis.

This is an extract from the manager’s section of SIGT’s annual report, published in June: “We have been increasing liquidity exposure over the last two or so years in preparation for the end of the investment cycle and more difficult times ahead. More recently, we have initiated a position in the Invesco Physical Gold ETC. We consider physical gold to be a store of value (as indeed it has been for thousands of years) and one that can hold its own when central banks are seeking to debase their paper currencies in order to support economic growth as we think they will have to in the years ahead.”

Is there actually value?

Gold has divided opinion for years. Capital Gearing Asset Management, for example, do not see value in it. Based on the following chart that dates back to 1973, they are of the view that the real price of gold is expensive. 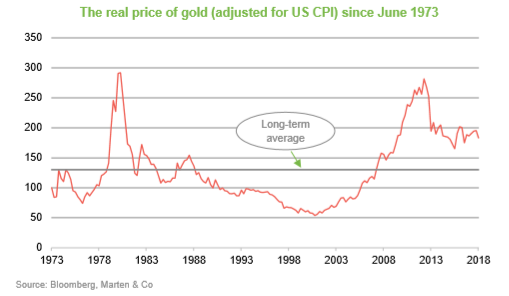 CGT/CQS/SIGT: QuotedData takes a look at gold after its best month in years

For fourteen consecutive years BlackRock Smaller Companies has outperformed its benchmark and increased its dividend. Over that period, the NAV has grown nearly ten-fold whereas the benchmark has almost quadrupled. […]

City Natural Resources’ investment manager, CQS (UK) LLP, has informed the Board that Will Smith, co-manager of the Company’s investments, will be leaving CQS/New City Investment Managers.   Will’s […]

CQS Natural Resources Growth & Income’s strong precious metals weighting a silver lining – The year to 30 June 2019 was challenging for CQS Natural Resources Growth & Income (CYN). At the financial year-end, the NAV was down 13.9% year-on-year. The company says that since the end-of-the-period, it has outperformed peers, with its exposure to precious metals […]