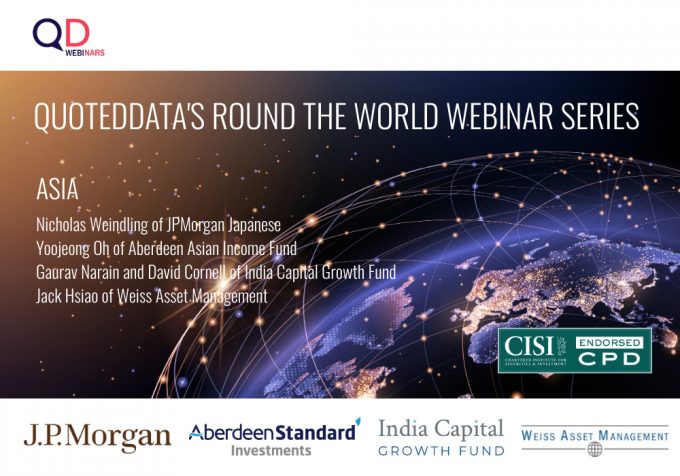 On 10th February 2021, QuotedData hosted the penultimate Round the World webinar from our series. This webinar was focused on Asia and included presentations and Q&As from 4 investment companies’ managers, covering markets across Asia. We would like to thank all of our speakers and attendees for joining us.

Click on the links below to watch the presentations –

We have compiled a short survey on this event, which we would be grateful if you could complete – click here.

Click here for information on the rest of the series and the links to register.

Nicholas Weindling, managing director, is a country specialist for Japan equities and a member of the Japan team within the Emerging Markets and Asia Pacific (EMAP) Equities team based in Tokyo. Nicholas joined the Firm in 2006 from Baillie Gifford in Edinburgh, where he worked initially as a U.K. large cap analyst and latterly as a Japanese equities investment manager. Nicholas obtained a B.A. (Honours) in History from Cambridge University.

Yoojeong Oh is an Investment Director on the Asian Equities Team at Aberdeen Standard Investments. Yoojeong joined Aberdeen in 2005 and was initially a member of the UK and European Equities Team in London before moving to Singapore. Yoojeong graduated with an MEng in Engineering, Economics and Management from the University of Oxford and is a CFA® charterholder.

Gaurav Narain joined Ocean Dial in November 2011 and has been involved with the Indian markets for the past 25 years. He has held senior positions as both a Fund Manager and an equities analyst for New Horizon Investments, ING Investment Management India and SG (Asia) Securities India. He holds a Masters in Finance and Control and a Bachelor of Economics from Delhi University and is based in Mumbai.

David Cornell joined Ocean Dial in January 2010 from Henderson Global Investors. He is based in London having been resident in Mumbai for three years until July 2013. He started his career in 1995 covering India for Robert Fleming Securities, ran the BDT Emerging Market Fund from 2004 to 2008 which compounded at over 25% per annum during his tenure and then co-managed New Star’s Institutional Emerging Market Fund. He has a degree in English and History from the University of Durham and was in the British Army from 1991-1995.

Jack joined Weiss Asset Management (“WAM”) in February 2008; he is a Managing Director and a member of the Investment Committee. Jack works Asian hours from Boston, MA and oversees all strategies in Asia including investments across preferred shares, holding companies, bonds, distressed, value equities and other instruments.  Jack interned at WAM from 2006-2008 while performing his undergraduate studies at Harvard College. Jack received his Bachelor degree in Economics from Harvard.

A remarkable success story Weiss Korea Opportunity Fund (WKOF) was one of the best-performing of all London-listed investment companies last year, and since its 2013 launch it has […]