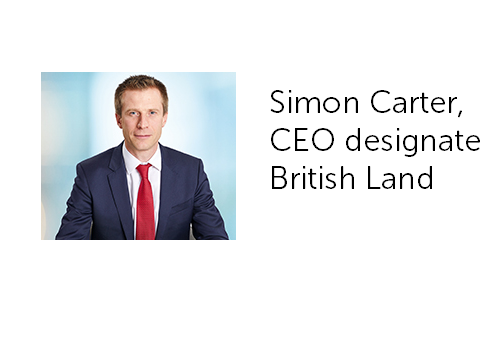 The announcement says that, after a thorough search, Simon Carter, currently chief financial officer of British Land, will succeed Chris as chief executive officer on 18 November 2020.

Simon has been the CFO at British Land since returning to the company in May 2018. He has a broad range of experience within the Real Estate and Finance sectors and was previously the chief financial officer of Logicor, the pan-European logistics warehouse business. Prior to that, Simon was finance director of Quintain Estates & Development Plc, a leading build-to-rent and mixed-use development business and owner of the 85-acre mixed-use development site at Wembley. Before that, Simon spent over a decade with British Land, holding a number of leadership roles including heading the Strategy, Corporate Finance and Treasury teams and was a member of the executive committee from 2012 until 2015. Simon also previously worked for UBS in fixed income and qualified as a chartered accountant with Arthur Andersen.

British Land delivered a NAV total return for the year to March 2022 of 15.6% as the value of its portfolio continues to recover from the pandemic lows. […]

British Land has agreed a deal to sell a 75% stake in its Paddington Central assets to GIC for £694m. The transaction establishes a new joint venture with […]

Securities Trust of Scotland (STS) has announced its annual results for the year ended 31 March 2022. During the period, STS provided NAV and share price total returns of 16.8% and 17.4% respectively, which compared to a total return of 10.8% in the Lipper Global – Equity Global Income Index. These compare to a net […]

British Land shares update on new strategy – British Land (BLND) has today published an update on its strategic progress, after first announcing its new business model and strategy in May 2021. Since highlighting its plans to “more actively focus capital on competitive strengths in development, active management and repositioning assets [by] investing behind campuses […]

British Land (BLND) has announced that, following confirmation in May that planning has been secured at Canada Water, it has now completed the drawdown of the 500-year headlease with Southwark Council. In addition to this, it has signed its first pre-let with new higher education enterprise, TEDI-London, which has chosen to locate its new campus […]

A new real estate investment trust (REIT) focused on the life science laboratories is looking to raise £300m in an initial public offering (IPO). Life Science REIT has announced its intention to launch on the Alternative Investment Market (AIM) of the London Stock Exchange through a placing, offer for subscription and intermediaries offer targeting the […]

Castelnau Group Limited (Castelnau) has announced that it has published a prospectus in relation to an initial public offering (IPO) on the LSE’s specialist fund segment of the main market (SFM). Castelnau is targeting a capital raise of £170m (170 million shares at £1.00 per share) via an initial placing, an offer for subscription and […]

In QuotedData’s morning briefing 26 August 2021: Stenprop (STP) has acquired Whitacre Industrial Park in Huddersfield and a portfolio of five MLI estates (the Duke Portfolio) across the UK, for a total consideration of £15.m. The combined purchase price reflects a net initial yield of 7.2% and a capital value of £64 per sq ft. Following these […]

In QuotedData’s morning briefing 18 February 2021: SEGRO (SGRO) says its French subsidiary is making a tender offer for the 5.6% of Sofibus Patrimoine that it doesn’t already own. SEGRO’s offer is €313.71 per share. Grainger (GRI – the residential property company) has made Robert Hudson its chief financial officer. Rob is currently chief finance and operations […]

In QuotedData’s morning briefing 18 December 2020: Ecofin U.S. Renewables Infrastructure Trust has announced that its IPO has raised gross proceeds of $125 million. Commitments under the Placing and applications under the Offer for Subscription have been satisfied in full at the Issue Price of $1.00 per Ordinary Share. It is expected that Admission will become […]